Latin America to the rescue? 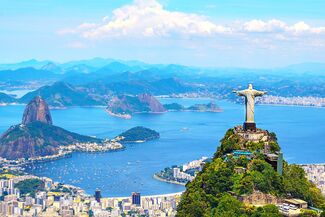 As interest rates rise across the globe and many countries grapple with escalating inflation, commodity-rich countries in Latin America are well placed to benefit. Countries including Brazil, Mexico, Argentina and Colombia are key exporters of oil, metals and grains, which offer sought-after protection against inflation.

Investment companies in the Latin America sector have returned 11.4% to investors in the year to date, although long-term performance has disappointed, with returns of 9.0% and 10.1% over the past five and ten years respectively1.

Ed Kuczma, Co-Manager of BlackRock Latin American Investment Trust, said: “One of the best performing sectors over the last six months, as inflation has taken hold, has been commodities, and this has been particularly beneficial to Latin American markets. Vast stimulus in the US and economic recovery across the world had already pushed up demand for commodities after a period of tight supply, to fuel ambitious infrastructure plans and green development.

“We also hold a pulp maker. There are well-documented sustainability concerns over the use of plastic and there is increasing substitution with paper products. This is a structural driver for pulp producers. This ties in with a broader overweight position in materials, which dovetails with the reflation trade.”

Charles Jillings, Manager of Utilico Emerging Markets Trust (UEM), said: “Most Latam economies are significant commodity exporters, with several countries being net exporters of oil, metals and grains. These economies are expected to benefit from inflationary pricing for commodities as well as increased demand which has been displaced by the war in Ukraine. This should see a firmer outlook for the region.

“In UEM, we do not invest directly in commodities, but we do invest in the infrastructure which enables the movement of these commodities. Examples of this include Rumo, the Brazilian listed rail operator which transports soy and corn harvest from Mato Grosso, and Santos, the port operator which ships them on, typically to China. These companies, and many of our other Brazilian assets, have long-term concessions which allow for price increases, many with annual price adjustments linked to specific inflation indices.”

What have Latin American equities got to offer besides commodities?

“Latin American equities offer access to a very large consumer market with potential for vast innovation due to the increasing appetite of consumers for digitisation and technological advancements. The demographics of the region are very favourable with a young population and a rising middle class.”

Ed Kuczma, Co-Manager of BlackRock Latin American Investment Trust, said: “The recent rally shows no signs of fading, and while we have taken advantage of rising commodity prices with a relatively high weighting in the commodities and materials sector, our largest position is in financials. These are a key beneficiary of a rising rates environment, with higher rates allowing them to raise margins. Valuations are still low for the banking sector in the region in particular, while return on equity is high.

“In addition, Latin American countries are seeing many of the same trends that have been seen across the world, from digitisation to ecommerce adoption. There are also opportunities to benefit from growth in under-penetrated markets, such as the private medical space in Brazil.”

Charles Jillings, Manager of Utilico Emerging Markets Trust, said: “Latin American equities offer so much more than commodities, as there are a number of investment opportunities arising from the continual growth in the middle class and their propensity to spend, improvement in living standards and desire by Latam governments to improve their country’s infrastructure.

“In Brazil for example, its waste management continues to be way behind Europe and the US, which has led the way for private operators such as Orizon to step into a sector that still lacks formal regulation, and capitalise on the drive to help clean up the country. In Mexico, the pent-up travel demand on the back of Covid-19 has helped drive strong air passenger growth within the Mexican airport operators, with Grupo Aeroportuario del Pacifico now operating above pre-pandemic passenger levels.”

The portfolio managers of Templeton Emerging Market Investment Trust said: “Latin America’s population of over 600 million people gives it a tremendous array of opportunities from financial inclusion, pent-up demand for consumer goods and services and the ability to roll out new technologies to large consumer markets. Also, its vast and low-cost commodity resources and consumer demand growth bring with them opportunities in infrastructure development including physical projects and financial platforms to provide funding.

“Brazil has a project pipeline that aims to close the year with $200 billion in capital commitments for the next decade. There also opportunities that nearshoring brings to Mexico as industries see the need to diversify supply sources.”

What are the risks?

Charles Jillings, Manager of Utilico Emerging Markets Trust, said: “The main risks which we see in Latam at the moment relate predominantly to political and economic issues. Election cycles typically accentuate market volatility, and outcomes can be very unpredictable, particularly as it is evident that populism is on the rise. Brazil is holding its elections later this year, and sees the remarkable return of left-leaning Lula as a candidate against the current right-wing President Bolsanaro. As both are viewed as ‘known quantities’, markets have been broadly benign on this issue. However, Colombia has just elected its first left-wing president, Gustavo Petro, who beat businessman Rodolfo Hernandez in a run-off vote last weekend. In Chile, the constitution is being rewritten and will be subject to a referendum, heightening uncertainty.

“On economic issues, the key concern has been inflation, and the willingness of central banks to tackle this with higher interest rates at the expense of growth potential. It is notable that the likes of Brazil have been ahead of the curve here, increasing interest rates from 2% to 13.25% in just over a year, positively reflecting on the independence of the central bank. Chile has hiked rates to 9% from 0.5% in under 12 months, as it is also looking to control inflation. With growth forecasts remaining in positive territory, these are encouraging signs that these economies will be able to navigate what is a very challenging inflationary environment.”

Ed Kuczma, Co-Manager of BlackRock Latin American Investment Trust, said: “A growing middle class has fuelled domestic consumption, although this demographic is now under pressure from rising inflation. Exacerbating this, countries such as Chile and Peru have elected higher taxing governments, which could squeeze consumer spending at a vulnerable time for households. They have also set their sights on the mining sector as a target for taxation, which they see making higher profits. This may make it tougher to bring on the new capacity badly needed to meet demand.”

Mubashira Bukhari Khwaja, Manager of abrdn Latin American Income, said: “Similarly to the rest of the world, the key risks to investors in Latin America are macro risks, especially in terms of inflation. Latin America suffered from hyperinflation during the 1980s and inflation stabilisation is a phenomenon of the past 20 years. Long-term growth is also important, and higher investment is required for the region to achieve a faster GDP growth rate. Lastly, political polarisation that we have seen globally, is also taking place in Latin America, with leftist governments achieving an upper hand in the past few years. So far, these have been more leftist in ideology than on the policy front, so it is a risk well reflected in current valuations.”

What is your company’s approach to ESG?

Mubashira Bukhari Khwaja, Manager of abrdn Latin American Income, said: “Assessing the risks and opportunities of climate change is a core part of our ESG integration approach. In our view, companies that successfully manage climate-change risks should perform better in the long term. This has led to the introduction of our climate stress testing tool, with which we are able to analyse potential net present value (NPV) impairments across multiple climate scenarios. This is used on an ongoing basis by fund managers.

“Regular engagement with any high-emitting investee companies allows us to better understand their exposure and management of climate change risks and opportunities. In our actively managed investments, ownership provides us with a strong ability to challenge companies where appropriate. We can also influence corporate behaviour positively in relation to climate-risk management. We believe that this is more powerful for an effective energy transition than a generic fossil fuel divestment approach.”

Ed Kuczma, Co-Manager of BlackRock Latin American Investment Trust, said: “The Latin American economies are large producers to the world of vital food, timber, minerals and oil. These are all areas that are at the forefront of concerns around climate change, biodiversity and proportionate and sustainable use of land and ocean resources. ESG analytics are integrated into our investment process, and the board firmly believes that communication and engagement with portfolio companies can lead to better outcomes for stakeholders and the environment.”

Emerging markets – from uncertainty to opportunity

7 January 2022
As investors grapple with economic uncertainty and mounting regulation, the outlook for emerging markets may seem less positive. Against this backdrop, Fidelity Emerging Markets Limited portfolio manager Nick Price outlines why he expects to find opportunities amidst the uncertainty.

1 September 2021
As Fidelity Asian Values turns 25 years old, portfolio manager Nitin Bajaj reviews how the dramatic changes seen in Asia have shifted the centre of economic gravity from West to East - and are mirrored in the growth of the trust.