Marcel Stötzel, portfolio manager of the Fidelity European Trust, outlines why he thinks that some European tech businesses could be key enablers of the metaverse, with the potential to strengthen brand loyalty and boost industry profits. 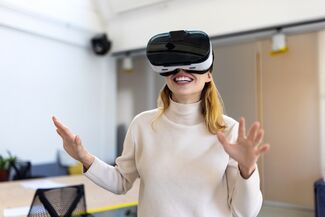 The race among tech firms in the US and Asia to build out the metaverse has dominated headlines but several European companies are also driving this shift towards virtual worlds. Marcel Stötzel, portfolio manager of the Fidelity European Trust, outlines why he thinks that some European tech businesses could be key enablers of the metaverse, with the potential to strengthen brand loyalty and boost industry profits.

When one of the largest companies in the world rebrands itself as Meta, investors should at the very least take note. The company previously known as Facebook spent $10bn on the metaverse last year and has announced plans to hire thousands of workers to build its own virtual world. But it’s not just Meta that is looking to expand into the metaverse. Companies around the world are paying attention and mentions of the term in company transcripts have rocketed over the past year (see chart 1).

Meta is going after the metaverse because it believes that this network of 3D worlds could become the computing platform of the future. The metaverse will be accessed via virtual and augmented reality headsets and cryptocurrencies used to buy goods and services. It is still early days for the metaverse and optics and battery technology need to improve for headsets to become viable, but that doesn’t mean the idea is without merit. For the first time, cloud computing power and internet speeds are strong enough for virtual worlds to become a reality, and the metaverse will build on rapid advances in cloud, edge, 5G, blockchain, and cryptocurrencies.

The metaverse will create a new generation of winners and losers

Changes to computing platforms will create winners and losers and tech firms across the world are jostling to gain first-mover advantage. US tech firms have dominated previous technological shifts, with Microsoft and Intel leading the development of desktop computers and Apple and Google driving the transition to mobile. European firms such as Deutsche Telekom and Nokia also tried in vain to keep up but in the end lacked the continuous innovation needed.

Meta is clearly leading the charge with its Occulus headset platform and Asian companies such as Tencent, Netease, and Baidu are also launching software and platforms that offer virtual experiences. But despite the heightened attention on these large US and Asian players, we think that European companies will this time around also play an important role in developing and participating in the metaverse.

To begin with, contrary to prior cycles Europe is not asleep when it comes to innovation and European venture capital (VC) funds raised across areas such as the metaverse and blockchain have all shot up over the last year. European VC investment is even approaching that of the US (see chart 2, right-hand side axis).

Source: Third-party data from Finsmes, Techcrunch, Livemint and press reports in Reuters and Yahoo (press reports are not confirmed and the companies have not commented), Pitchbook, Morgan Stanley Research, March 2022.

The business-to-business focus of European tech firms means that their innovations have largely flown under the radar. However, Europe has many competitive companies that are well-positioned in areas such as semiconductors and 3D design, which will play an important role in building the metaverse.

For example, Dutch company ASML provides chipmakers with the hardware, software, and services to produce patterns on silicon wafers. Chips are a vital component of virtual and augmented reality headsets and gaming consoles and as the metaverse creates demand for ever more powerful chips, semiconductor foundries such as TSMC, Intel, and Samsung could all increase orders for ASML’s extreme ultraviolet lithography machines. That means that ASML could become an important indirect enabler of the metaverse.

French software maker Dassault Systemes could play an even more direct role in making the metaverse a reality. For example, it has developed a simulated 3D heart model as part of its Living Heart Project and is exploring how simulation could be used to test medical devices and even simulate surgeries in the virtual world.

Metaverse platforms and software are on the rise in Europe

Software and apps are developing in tandem with metaverse hardware and there are several European companies looking into the opportunities thrown up by virtual worlds. Spanish technology travel company Amadeus recently launched a partnership with Microsoft and is exploring how it can mix physical and virtual holiday experiences using the US tech firm’s gaming unit. German software company SAP has confirmed that it has been approached by its partners about collaborating on metaverse opportunities and has discussed potential business-to-business applications such as learning or commerce.

Several unlisted companies have also launched platforms that are helping to bring the metaverse into the mainstream.

It is early days and many of these initiatives are still small. Digital revenues for luxury brands are currently low and not all companies are convinced. Over the longer term however the potential of the metaverse could be very large. Estimates from Morgan Stanley suggest that over the coming decade the metaverse could boost the luxury industry’s profits by 25%, with metaverse gaming and NFTs set to constitute 10% of the sector’s addressable market by 20301. Given the high margins of many of these digital products, the metaverse could clearly have a meaningful impact on share prices.

Europe could gain a significant slice of the metaverse market

We think that the market has underestimated the key role that many European companies will play in enabling, developing and benefiting from the metaverse. Companies in the region are becoming involved across the metaverse value chain, from providing the glasses and 3D designs that will help virtual worlds come to life to using NFTs and gaming ecosystems to build brand strength and customer loyalty.

Certain European companies (in particular in the luxury space) are on equal footing with global peers when it comes to the metaverse and we believe they could gain a far more significant slice of this new market than European companies managed to secure in either of the previous technological shifts to desktop computers and mobile.

For patient investors willing to dig beneath the surface, European companies offer a plethora of ways to gain exposure to what could be the computing platform of the future.

The value of investments and the income from them can go down as well as up, so you may get back less than you invest. Investors should note that the views expressed may no longer be current and may have already been acted upon. Overseas investments are subject to currency fluctuations. Fidelity European Trust PLC can use financial derivative instruments for investment purposes, which may expose it to a higher degree of risk and can cause investments to experience larger than average price fluctuations. The shares in the investment trust are listed on the London Stock Exchange and their price is affected by supply and demand. The investment trust can gain additional exposure to the market, known as gearing, potentially increasing volatility. This information is not a personal recommendation for any particular investment. If you are unsure about the suitability of an investment you should speak to an authorised financial adviser. Reference to specific securities should not be construed as a recommendation to buy or sell these securities and is included for the purposes of illustration only.

The latest annual reports, key information document (KID) and factsheets can be obtained from our website at www.fidelity.co.uk/its or by calling 0800 41 41 10. The full prospectus may also be obtained from Fidelity. The Alternative Investment Fund Manager (AIFM) of Fidelity Investment Trusts is FIL Investment Services (UK) Limited. Issued by Financial Administration Services Limited, authorised and regulated by the Financial Conduct Authority. Fidelity, Fidelity International, the Fidelity International logo and F symbol are trademarks of FIL Limited. UKM0622/371012/ISSCSO00081/NA

1 "Luxury in the metaverse", published by Morgan Stanley on 16 November 2021.

Staying the course amid uncertainty in Europe

30 March 2022
Amid rising volatility triggered by the Ukraine war, Sam Morse and Marcel Stötzel, portfolio managers of the Fidelity European Trust PLC, review the current market dynamics across regional equity markets. In particular, they highlight why their focus on building a balanced portfolio of robust dividend-payers is well positioned to deliver attractive long-term returns.

Grounds for optimism in Europe

3 December 2021
To mark the 30th anniversary of the launch of the Fidelity European Trust, What Investment’s editor-in-chief Lawrence Gosling spoke to the current lead portfolio manager Sam Morse.

Why caution pays dividends in Europe

13 January 2020
Sam Morse, Portfolio Manager of Fidelity European Values, gives his outlook for the region in 2020.

From Europe with love

7 June 2019
Ian Cowie makes the case for unloved companies in the EU.