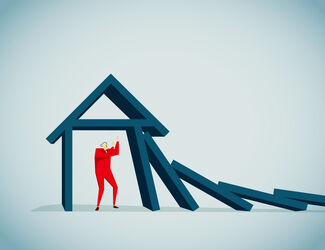 A friend once told me that, if what people put down on their health insurance forms about the alcohol they consumed was extrapolated across the entire population, it would account for just half of UK alcohol sales. ‘They just blatantly lie,’ he concluded.

Even if the data supports his claim, I am not sure he is right to conclude that the majority of us consciously and blatantly lie. As humans, we tend to think our best behaviour is more common than it is. So, we think a ‘good’ week alcohol wise is closer to an average one than it is, we forget the third glass of wine we had over dinner at the weekend, and ignore the 40th birthdays, weddings, leaving dos etc because, well, they don’t happen every year do they?

I was reminded of this as I read about the sad fate of Aviva UK Property Fund which, having been suspended for 14 months, has decided to go into liquidation, which means investors may have to wait another two years for their money back, so more than three years in total.

Yet the industry response to the FCA’s consultations about the length of notice period that should be applied to prevent these kinds of problems concluded that 90 days would be sufficient to allow managers to sell properties to meet redemptions. How do we explain this huge disparity in timescales?

A report by the Bank of England/FCA recently noted, where open-ended bond funds are concerned, that managers ‘appeared to overestimate the liquidity of their holdings, and for some funds were particularly overoptimistic’. I would suggest the same is happening for property funds. I am sure that some property funds might be able to sell some assets in 90 days in normal market conditions, but how common is this?

Also, to meet international standards, funds should be able to cater for stressed market conditions as well, which is when redemption pressure is often the greatest. And even if a fund could offload some properties in this timeframe, these are likely to be the most attractive and easiest to sell – potentially leaving investors who remain in the fund exposed to a very different, and less liquid, portfolio.

Adequate notice periods would prevent the need to hold large tranches of cash, would allow managers to sell properties in an orderly way at a decent price, and avoid the need for suspensions which could ultimately lead to liquidation. But all the evidence shows that 180 days, let alone 90, will not be sufficient, which is why the AIC suggested a year, as is required in Germany where they have a thriving and growing sector.

A more prudent approach to notice periods is essential, as plans for a long-term asset fund will allow open-ended funds to invest in assets that are far more complex and illiquid than property. But, as I commented earlier this month, the LTAF won’t be subject to all of the same regulatory rules that apply to open-ended property funds. This means that a fund could launch as an LTAF and hold the same portfolio as the Aviva fund, but its investors would not benefit from these protections.

We have never suggested (as some commentators have) that open-ended funds should be banned from holding illiquid assets. Nor do we have any problem with the launch of the LTAF, providing it is safe for consumers and the wider economy and allows competition on a fair basis.

So if this can be achieved, we are happy to raise a glass along with others when the LTAF is launched. But unless we are honest with ourselves and behave sensibly, we shouldn’t be surprised if we wake up with a hangover.

Ian is the Chief Executive of the AIC, having taken on that role in 2010 on his promotion from Deputy Director General. Prior to that, Ian was the AIC’s Technical Director, advising members on areas such as taxation, accounting, company law and regulation.

The transformation of UK infrastructure investment