§ Project Mirror - RCOI participated in a $20.0 million first lien delayed-draw term loan to a community solar development company. Led by operating partners of a private equity sponsor, the company acquires, constructs and manages community solar portfolios across the United States for eventual sale to third parties. At closing 28 December 2020, $6.9 million was committed by RCOI, of which $3.4 million is currently invested. The first lien term loan has a maturity of December 2021 and an expected all-in yield to maturity of 13.3 per cent for RCOI on a fully-drawn basis. This deal marks the first in a rapidly growing pipeline of de-carbonization investments.

§ Project Boulder II Partial Realisation - RCOI originally participated in a recapitalization of a sponsor-backed company that is the leading specialty rental provider of containers and mobile asset management solutions across the energy, industrial, refining, and petrochemical industries. At closing on 1 October 2020, $7.4 million was committed by RCOI. Following the sale of its offshore business, 43% of the outstanding principal was repaid on 3 December 2020, with the residual investment remaining in a first lien senior-secured position with sub 3x leverage.

§ Project Alp Partial Realisation - RCOI originally participated in a $55 million first lien term loan for a sponsor-backed exploration & production company that is focused on development in the Northern Delaware with acreage in Lea and Eddy counties. At closing on 18 June 2019, $13.3 million was committed by RCOI.  On 23 December 2020, RCP sold $20mm of the first lien term loan to an affiliate of the borrower at a price of 100.5.  This sale settled in early January 2021, and RCOI's remaining commitment is $8.2 million.

§ Project Sierra Partial Realisation - RCOI originally participated in a $75 million first lien delayed-draw term loan for a sponsor-backed midstream company that provides crude gathering, storage and blending services to a diversified footprint of producers in the core of the Delaware Basin. At closing on 6 March 2020, $13.7 million was committed by RCOI. As part of a fulsome amendment and in exchange for covenant relief, the borrower paid down $40 million of principal as well as interest and fees on 28 December 2020. The remaining $35 million remains in a first lien senior-secured position, of which RCOI's commitment is $6.4 million.

§ Secondary Realisation - RCOI opportunistically purchased two loans in the secondary market during Q3 2020, most of which settled in Q4 2020. As new private investment opportunities arose, such as Project Boulder II and Project Mirror, we fully exited these loans during Q4 2020. In total, RCOI invested $13 million and realized $13.5 million, which represented a 10.5 per cent. IRR and 1.01x MOIC.

§ In addition, Project Chase drew down $9 million of availability in the end of December 2020 and is now fully funded. At closing 3 July 2029, RCOI committed $12.3 million, of which all is now funded.

Pro forma for all the above activity, the Company is 78 per cent. committed and 74 per cent. invested. The Company currently has $20.7 million of capital available for investments. Since inception, the Company has also repurchased approximately 8.5 million of its own ordinary shares.

RCOI seeks to generate consistent Shareholder returns predominantly in the form of income distributions, principally by making senior secured loans to small and middle-market energy companies, which span conventional energy as well as low carbon and renewable sources. The investment strategy is predicated on asset-based lending, with conservative loan-to-value ratios and structural protective features to mitigate risk. The Company will invest broadly across energy subsectors globally, with a primary focus on infrastructure businesses and going forward those with de-carbonization strategies in North America. RCOI intends to create a diversified portfolio across basins, commodities, technologies and end-markets to provide natural synergies and hedges that could enhance the overall stability of the portfolio.

Neither the contents of RCOI's website nor the contents of any website accessible from hyperlinks on the websites (or any other website) is incorporated into, or forms part of, this announcement.

RNS may use your IP address to confirm compliance with the terms and conditions, to analyse how you engage with the information contained in this communication, and to share such analysis on an anonymised basis with others as part of our commercial services. For further information about how RNS and the London Stock Exchange use the personal data you provide us, please see our Privacy Policy.
END
PFUSSIFWMEFSESF 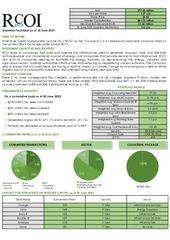 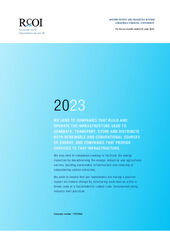 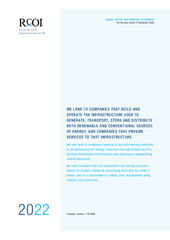