The Board notes the announcement made today, and reproduced in full below, in relation to Troy Asset Management's succession plans for Francis Brooke. The Board has been aware and supportive of the plans for some time and looks forward to a well managed and seamless transition.

Francis Brooke to hand over fund management responsibilities and become executive Vice-Chairman of Troy Asset Management at the end of 2021.

Francis Brooke, who has managed the £3.3bn* Trojan Income Fund since launch in October 2004 and the £241m* Troy Income & Growth Trust plc since 2009, will be relinquishing his fund management responsibilities on 31st December 2021 and taking up a new role as executive Vice-Chairman of Troy Asset Management Ltd. In this role, Francis will continue to contribute to the next stage of Troy's development as a substantial shareholder, a member of the board and as a member of the company's Executive Committee.

Blake Hutchins will become the Trojan Income Fund's lead manager with effect from 1st January 2022. Blake joined Troy in October 2019 as Co-Manager of the Trojan Income Fund with both Francis Brooke and Hugo Ure. Under Blake's management, the fund will continue to invest in line with its proven philosophy, with a focus on achieving strong, risk-adjusted returns with low volatility.

Hugo Ure, who joined Troy in 2009, will remain Co-Manager, with Blake Hutchins, of the Troy Income & Growth Trust. Hugo is also Troy's Head of Responsible Investment and lead manager of the Trojan Ethical Income Fund.

Francis Brooke, Investment Director at Troy and Co-Manager of the Trojan Income Fund and the Troy Income & Growth Trust, said: "This is the right time for me to pass on these responsibilities as I take on a new role as executive Vice-Chairman. We believe that this carefully planned succession will be a successful transition, with the process completing by the end of the year. Blake and Hugo are both well known to our investors and have established investment track records. Having worked closely with them both, I am delighted to be able to leave the funds in such proven and capable hands."

Blake Hutchins, Co-Manager of the Trojan Income Fund and the Troy Income & Growth Trust, said: "Francis has done a wonderful job managing the Trojan Income Fund and Troy Income & Growth Trust over many years, taking an approach to equity income investing that I have long admired. I greatly look forward to further building on the consistent record of attractive, resilient, risk-adjusted returns. With a talented, well-resourced team, and Troy's clear and repeatable investment approach, this is something I believe we are extremely well-placed to do."

Sebastian Lyon, Founder & CIO of Troy, said: "Since launching the Trojan Income Fund in 2004, Francis has delivered strong risk-adjusted returns to our investors, building an enviable track record with a consistent, conservative investment approach. We are delighted that Blake has settled in to the Troy investment team so seamlessly and have every confidence he and Hugo will build on Francis's track record. Francis and I have enjoyed a successful partnership for over 17 years and I am delighted that he will stay on Troy's board in this new strategic role as executive Vice-Chairman."

Francis joined Troy in June 2004 and launched the Trojan Income Fund later that year. He was appointed manager of Troy Income & Growth Trust in July 2009. Francis began his career in 1986 at Kleinwort Benson Securities and then joined Foreign & Colonial Management Ltd in 1989, where he was appointed Director in 1995. From 1997 to 2004 he worked for Merrill Lynch Investment Managers as a Director, managing over £1.5 billion of UK Equities. Francis gained his MA in Politics from Edinburgh University and holds the ASIP qualification. He is an Associate Member of the CFA Society of the UK.

Blake joined Troy in 2019 from Investec Asset Management (now Ninety One) where he was lead manager on the UK Equity Income Fund and co-manager on the Global Quality Equity Income Fund. Prior to that, Blake managed retail and institutional UK equity funds at Columbia Threadneedle. Blake holds a MA Hons in Economics and Politics from the University of Edinburgh and is a CFA Charterholder.

Hugo joined Troy in 2009 from Kleinwort Benson, where he was an equity analyst. Hugo gained his MA in Geology from Oxford University in 1999, following which he spent five years serving with the Scots Guards. He holds the CISI Diploma and is a CFA Charterholder.

RNS may use your IP address to confirm compliance with the terms and conditions, to analyse how you engage with the information contained in this communication, and to share such analysis on an anonymised basis with others as part of our commercial services. For further information about how RNS and the London Stock Exchange use the personal data you provide us, please see our Privacy Policy.
END
UPDDKQBBOBKDCBB 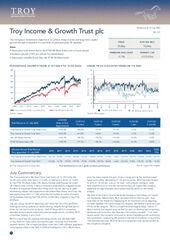 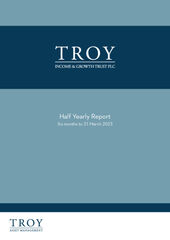 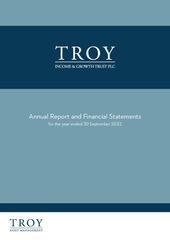