The Company reminds holders ("CULS Holders") of 2.25 per cent. convertible unsecured loan stock 2025 ("CULS") constituted by the Trust Deed dated 24 May 2018 that they have the right to convert ("Conversion Right") the whole or such part (being an integral multiple of £1 nominal) of their CULS as they may specify into fully paid Ordinary shares of 25p each in the capital of the Company ("Ordinary Shares") at any time during the period of 28 days ending on 30 November 2021 (the "Conversion Date") in accordance with the terms of issue of the CULS which were set out in the prospectus of the Company dated 20 April 2018.

This announcement is issued by way of a reminder only and is not to be read as a recommendation to CULS Holders to exercise their Conversion Rights.  You are not obliged to exercise your right to convert and if you do not convert on this occasion you will have further opportunities to do so in May and November each year up to 31 May 2025. Notices will be issued via RNS reminding CULS Holders who do not exercise their Conversion Rights in full on this occasion of their rights to convert at subsequent opportunities.

Note: The above analysis is based on the information set out in the Schedule and does not take into account any tax which might be payable on CULS Holders' capital returns.

Holders of CULS in certificated form should refer to the instructions on their CULS certificate(s).  In order to exercise the Conversion Rights which are conferred by any CULS held in certificated form, the CULS Holder must lodge the relevant CULS certificate(s) at the office of the Company's Registrars, Equiniti Limited, Corporate Actions, Aspect House, Spencer Road, Lancing, West Susex BN99 6DA during the period of 28 days ending on 30 November 2021 at 5.00pm, having completed and signed the notice of exercise of Conversion Rights thereon. Once lodged, a notice of exercise of Conversion Rights shall be irrevocable, save with the consent of the Company.

CREST members should refer to the CREST Manual for information on the CREST procedures and authentication required to effect conversion. The Conversion Rights which are conferred by any CULS held in uncertificated form shall be exercisable if an uncertificated conversion notice is received during the period of 28 days ending on 30 November 2021.  The prescribed form of uncertificated conversion notice is a Transfer To Equity ("TTE") instruction which, on settlement will have the effect of crediting a stock account of the Registrar in accordance with the details specified below.  The TTE instruction must be properly authenticated in accordance with Euroclear's specifications and must contain the following details in addition to any other information required:

(a)  the nominal amount of CULS in respect of which Conversion Rights are being exercised;

(b)  the participant ID of the CULS Holder;

(c)  the member account ID of the CULS Holder;

The TTE instruction should be input to settle by no later than 1.00pm on 30 November 2021 in order to receive Ordinary Shares arising from conversion within 14 days thereafter. Once lodged, an uncertificated conversion notice shall be irrevocable, save with the consent of the Company.

Ordinary Shares allotted pursuant to the exercise of Conversion Rights will be allotted not later than 14 days after, and with effect from, the Conversion Date.

Certificates for Ordinary Shares, and certificates for the balance of any CULS not converted, will be despatched to holder(s) in accordance with their instructions not later than 28 days after the Conversion Date.

The Registrar will instruct Euroclear to credit the Participant ID and Member ID Account as specified in validly received uncertificated conversion notices with the number of Ordinary Shares arising on conversion, and the balance of any CULS not converted, by no later than the date upon which dealings in the Ordinary Shares are due to commence, which will be within 14 days from the Conversion Date.

Interest on CULS converted will be payable up to (but excluding) 30 November 2021 and will cease to accrue thereafter.

If you have any queries regarding the above procedures, these should be referred to the Company's Registrar, Equiniti Limited, on telephone number: 0371 384 2050 (from within the UK).  This helpline is available between 8.30am and 5.30pm (UK time) Monday to Friday (except public holidays in England and Wales) or +44 (0)371 384 2050 (from outside the UK).  Calls from outside the UK will be charged at international rates.  Please note that calls may be monitored or recorded.

For and on behalf of Aberdeen Standard Asia Focus PLC

RNS may use your IP address to confirm compliance with the terms and conditions, to analyse how you engage with the information contained in this communication, and to share such analysis on an anonymised basis with others as part of our commercial services. For further information about how RNS and the London Stock Exchange use the personal data you provide us, please see our Privacy Policy.
END
MSCDKDBKQBDDAKB 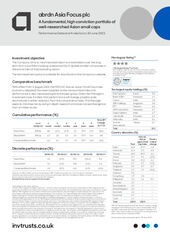 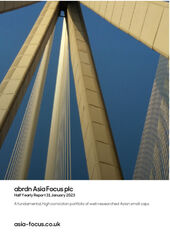 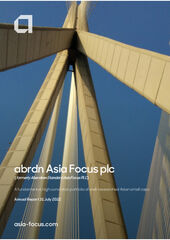