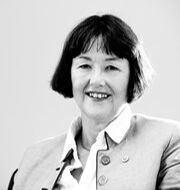 Susie joined the Board in April 2018 and became a member of the Audit Committee in December 2018.

Susie’s career has included working for KPMG from 1979 to 2001 where she was a banking and finance partner with KPMG Channel Islands from 1990 to 2001.  Subsequent to this she has joined numerous boards as a non-executive director in the charitable and investment sectors.