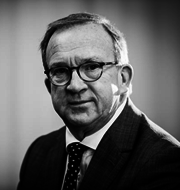 He is a Director of India Capital Growth Fund Limited.

Peter began his career in banking with Lloyds Bank Group.  Upon retirement in 2004, he was the Group’s Director of Offshore Banking, managing a business spanning the three offshore Crown Dependencies (Guernsey, Jersey and the Isle of Man).  Peter has worked for the Guernsey Government as its first Director of Finance Sector Development and then went on to combine that with the role of Chief Executive of Guernsey Finance.