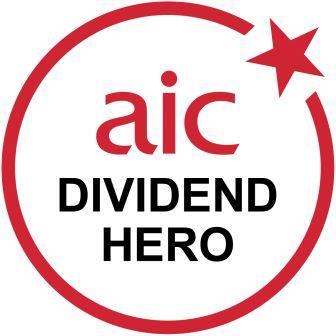 Further dividend information for each member company including the investment company’s dividend history is available on www.theaic.co.uk. In addition to this information, the AIC website shows the revenue reserve of an investment company, the undistributed income that the company keeps as reserves shown in millions. This is the ‘rainy day fund’ that investment companies can use to top up dividends in leaner times, which is made up of income that has been earned in previous years but not paid out.  The AIC also publishes the dividend cover, which shows the number of years the current revenue reserves can last based on paying the last full financial year of dividends.

Annabel Brodie-Smith, Communications Director of the Association of Investment Companies, said: “We now have four dividend hero investment companies with more than half a century of dividend increases, an enviable achievement. There are 21 dividend hero investment companies in total which have increased their dividends each year for at least 20 years or longer. Investment companies have an important structural advantage, namely, they can squirrel away up to 15% of the income they receive each year to boost their dividends in tougher times. Whilst markets have seen volatility since the start of the year, interest rates remain historically low and income is very much in demand, with many investors relying on regular dividends for everyday spending and bills.”