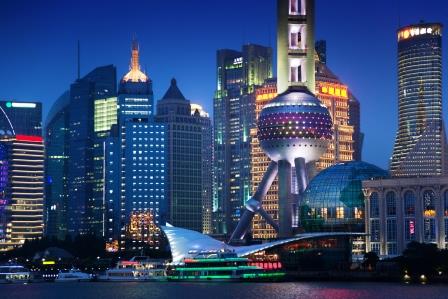 In January, I paid a visit to Shanghai. On the day I arrived, the headlines were dominated by economic gloom. Apple had just issued a profit warning, blaming China for its slowing sales, Chinese manufacturing data had been disappointing and the slowest growth figures for a decade were about to emerge. China already seemed to be suffering from the trade war with the US.

The trade war is only the most recent example of the increasingly tense relationship between East and West. Shanghai itself testifies to that relationship. The city’s rise – from minor town to trading port to financial centre and sprawling metropolis – was accelerated by colonial interventions by Western powers.

That legacy is readily apparent. The city’s best known feature is the Bund, its colonial era waterfront, where some of the grandest old buildings in Asia are today dwarfed by the towering modern skyscrapers. The Bund reminded me of the waterfront in Liverpool, another city that was also once of global importance. Its comparative decline underscores how everything is cyclical – one of the key concepts of our contrarian investment approach.

The Bund symbolises China’s changing fortunes. The imposing HSBC building – designed by British architects in the 1920s – is now topped with the red star of the Chinese Communist Party. Next door, the Customs House clock, which used to play the same bongs as Big Ben, now plays the Mao era favourite The East is Red.

Across the Huangpu River from the Bund are the gleaming spires of the Lujiazui financial district. At night, these are lit up with spectacular neon advertising. Some of this promotes domestic companies, but a lot is for US products.

This surprised me somewhat, given the trade war and the anti-American sentiment we hear so much about. But US goods are still very prominent in Chinese life. Despite Apple’s grumbles about the Chinese market, the iPhone was still ubiquitous and so were Nike trainers. Most Chinese people I spoke to seemed baffled by the trade war and by Trump’s hostility to their nation.

Ironically, one outcome of the trade war may be to accelerate the Chinese disregard for intellectual property that so annoys the US. I met the representatives of an elevator company that specialises in reverse engineering of Western technologies. This sort of close-to-the-wind import substitution is being encouraged by Trump’s tariffs. More generally, domestic producers are seeing an opportunity as imported goods become more expensive.

In the meantime, the trade war is certainly having a painful impact on the economy. The Chinese authorities appear keen to intervene and have already loosened their monetary policy by reducing the reserve requirements for the banks. From talking to the company management teams I met during my visit, I got a strong impression that there’s still considerable faith in the government’s ability to put everything right.

That faith may be sorely tested, especially if Trump’s tariffs continue and other foreign governments become more suspicious of Chinese companies with close links to the state – such as telecom giant Huawei. As it becomes more apparent that China is not a perpetual growth machine, keeping the show on the road may prove to be difficult.

For some time, China has been meeting this challenge through debt, but that’s hardly sustainable. Unstable amounts of local government debt are posing increasing problems. The instability of lenders is becoming more apparent too. My visit came just after the collapse of Xinhehui, only the latest of China’s peer-to-peer lending institutions to flounder. Such collapses – in which ordinary people risk losing large amounts of their savings – are likely to foment popular discontent. That’s what the Chinese authorities, wary of the fate of many imperial dynasties, fear most of all. Indeed, the additional impact of the trade war is most unwelcome.

As Apple’s warning shows, the trade war is also having an economic impact on the US and it’s affecting Japan and Europe as well. The economies of East and West are now so closely intertwined that the trade war may come to be seen as the last futile effort to assert the fading dominance of the American Empire.

Again, everything is cyclical. That includes the balance of global power. The Chinese were well ahead of the West in all sorts of ways for millennia, but that eventually led to complacency, decadence and then shock when Europeans arrived with superior technologies.

Has the West now grown decadent? And if so, is China the hungry, rising power that Western countries were in the colonial era? After the trauma of its sixteenth and seventeenth century wars, Europe went on to the successes of the settlement of the Americas and the Industrial Revolution. The turmoil of China’s 1949 revolution and its aftershocks profoundly reshaped its institutions. Those shifts may have left it primed to continue the economic successes of the past 30 years, even as the West diminishes.