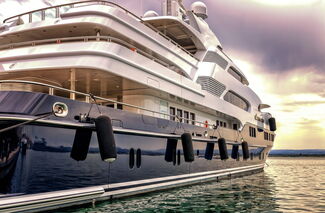 ‘Get rich quick’ schemes have hit the headlines recently, ranging from bitcoins to financial flash mobs causing prices to go up like a rocket before they come down like a stick. Speaking from personal experience, I would say the truth for most serious investors will be less dramatic but more profitable.

In plain English, anyone who wants to become wealthy should be prepared for it to take longer than some headlines might suggest. To understand why, there is no need to get bogged down in the details of distributed ledger technology (DLT) – the idea behind most virtual currencies – or Contracts For Difference (CFDs) and spread-betting, the financial derivatives favoured by online flash mobs. All you need to do is read the warnings the regulatory authorities require websites that promote these wheezes to display, albeit usually at the bottom of the page in small print.

For example, one outfit that describes itself as “the UK’s No. 1” admits: “75% of retail investor accounts lose money when trading spread bets and CFDs with this provider.”

That’s the mirror image of what medium to long-term investors in British shares have received over the last century and more. There’s no need to take my word for this, Barclays Bank has studied returns from various assets since 1899, when Queen Victoria was still on the throne.

Shares reflecting the changing composition of the London Stock Exchange over any period of five consecutive years since then did better than cash 76% of the time. That’s marginally higher than a three-in-four probability of winning, compared to CFDs’ three-in-four likelihood of losing.

I know which I prefer. If you could remain invested in shares for ten consecutive years, the probability of beating cash soared to 91%, according to the Barclays Equity Gilt Study 2020.

Time is the key ingredient, combined with investors who are willing and able to accept that share prices will fluctuate without warning and we may get back less than we invest – especially if we sell when prices are temporarily depressed. Fortunately, one form of pooled fund – the investment company – makes it easy and convenient to take a medium to long-term view of equities’ volatility, without any worries about being forced to switch into cash when markets are depressed.

That’s why I was delighted to see three of the investment companies I have held for more than a decade featuring in new research. This showed how investing the annual individual savings account (ISA) allowance since this tax shelter was set up in 1999 would have made​​​​shareholders millionaires today.

No fewer than 28 investment companies turned these ISA allowances – worth a total of £246,560 – into more than £1m, and eight of them finished the period worth more than £1.5m at the end of January. Scottish Mortgage (stock market ticker: SMT) is the standout success story with a tax-free pot worth £2,541,100 by 31 January 2021.

My long-term winners are Polar Capital Technology (PCT); Worldwide Healthcare (WWH); and Baillie Gifford Shin Nippon (BGS). Although none of them is in my ISA or worth £1m on its own, they all helped my self-invested personal pension (SIPP) soar into a seven-figure valuation.

Never mind the past or the present, what about the future? The sooner you start to invest, the more time you have to make your money grow.

Lest that sound a bit broad-brush, here’s a financial parable about fictitious twin sisters, Prudence and Extravaganza, based on mathematical fact. It shows how compounding can do the heavy lifting for wealth creation over long periods of time.

Prudence invests £100 a month from age 18 to 38 and then stops saving altogether. She achieves an average of 5% annual growth for the 20 years she invests and her fund continues to grow at 5% for the next 27 years until she retires at 65.

Extravaganza fritters away her money on frocks and handbags, saving nothing until she is 38. Then she starts saving £100 a month — until she, too, is 65. Extravaganza also achieves 5% a year during the 27 years she is investing.

So Prudence has more than twice as much at retirement as Extravaganza, even though Prudence set aside a total of only £24,000, while Extravaganza invested £32,400. The explanation is that Prudence invested for 20 years before Extravaganza got going and those early pounds had another 27 years to grow in the sensible sister’s fund. Similar but smaller effects can be seen over shorter periods of time.

This isn’t the sort of thing they teach at school – but perhaps it should be. If it was, City cynics might not be able to joke that compound interest is earned by investors who understand it – and paid by people who don’t.

The only practical option is to take an active interest in serious investment - as opposed to ‘get rich quick’ schemes’ - and the sooner we start the better. It might not make for exciting headlines but this long-term investor sincerely believes it is better to grow wealthier slowly than to go bust quickly.

5 March 2021
Hannah Smith explains why private equity could surprise in 2021.