Growth or income – can you have both?

Ian Cowie considers and how investors can enjoy a mixture of both income and growth investing. 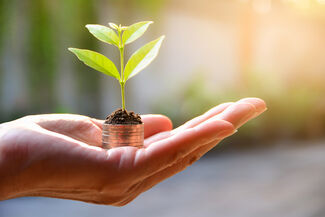 Does the search for income - or the discipline of investing for dividends - mean too many British investors buy into “corporate dinosaurs” that deliver high yields but low total returns? This question is worth asking after shares in London have lagged behind New York and other major markets for years, prompting one hedge fund manager to claim recently: “The City of London is in danger of becoming a sort of Jurassic Park where fund managers dedicate themselves to clipping coupons rather than encouraging growth and innovation.”

Compare and contrast total returns over the last year of 20 per cent from the Standard & Poor’s 500 index, a broad measure of the American market, or 18 per cent from the Euro Stoxx 50, a continental benchmark, with just 11 per cent from the FTSE 100 index of Britain’s biggest shares. Meanwhile, investors willing to accept higher risks in pursuit of higher rewards could have enjoyed total returns of 21 per cent from India’s Bombay Stock Exchange (BSE) or - elsewhere in emerging markets - just 3 per cent over the same period from China’s Shanghai Composite Index. (1)

The first point to make is that there is no need to leave the relative security of the heavily-regulated London Stock Exchange (LSE) to gain access to markets around the world. Many investment companies listed in London give ordinary shareholders, including me, access to professionally-managed and diversified exposure to economies anywhere on this planet.

Another important distinction is that different investors have different aims and ways to achieve them. For example, hedge fund managers tend to use short-term tactics over perhaps a few months to maximise returns, while many individual investors may favour long-term strategies over years or decades to minimise risk and generate a mixture of income and growth.

The latter approach is certainly true of this individual shareholder who - unlike hedge fund managers - does not borrow to invest; holds no financial derivatives; regards dividend income as an important element in total returns and prefers to remain invested in a diversified global portfolio for five years or more. In practice, this means owning shares in investment companies with a wide variety of underlying assets and styles of management.

For example, I have held shares in the Japanese smaller companies specialist, Baillie Gifford Shin Nippon (stock market ticker: BGS); the country specialist, JPMorgan Indian (JII) and the self-descriptive Polar Capital Technology (PCT) for more than a decade, despite the fact that none of them pays any dividends at all. Instead, all three aim for capital growth and JII happens to have been my very first ten-bagger, after I first bought shares at 63p in June, 1996, that traded at 821p this month (DECEMBER). The five-year returns on these three investment companies are 105 per cent, 41per cent and 226 per cent respectively, according to independent statisticians Morningstar. So, it would appear that it can sometimes pay to forgo a ‘bird in hand’ in the hope of obtaining greater returns in future or ‘two in the bush’.

At the other extreme of my diversified portfolio, I also hold shares in investment companies whose priority is inflation-busting dividend income. For example, the industrial batteries specialist, Gore Street Energy Storage (GSF) yields just over 6 per cent income; the marine transport leasing company, Tufton Oceanic Assets (SHIP) yields 5.8per cent, and the renewable energy trust US Solar Fund (USFP) pays 5.6 per cent dividend income. None of these has a five-year return because they were launched in 2018; 2017 and 2019 respectively.

The past is not necessarily a guide to the future because share prices can fall without warning. Similarly, there is no guarantee that income growth will be sustained, because dividends can be cancelled or cut without notice.

However, it is also worth considering the way compounding works, with the potential for growth to arise on growth and income on income. For example, if dividend increases of 7.2 per cent per annum are sustained, shareholders’ income would double in a decade.

Anyone aiming to pay for retirement with income from our investments should consider how we would manage if dividend distributions disappoint. More positively, most of us will probably continue to aim for balanced income and growth. There is no need to go all out for one or the other; we can enjoy a mixture of both.