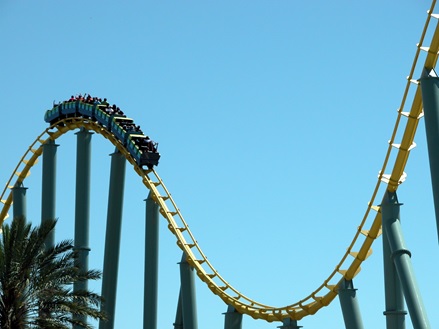 Shareholders suffered a shocking first quarter of 2020, with some stock market indices losing a third of their value before enjoying the biggest bounce in a decade or more. No wonder many people feel fearful about the future.

Fortunately, in this individual investor’s personal experience, there are reasons to be cheerful; to keep calm and carry on. One of the first lessons I learned as a cub reporter in the City more than 30 years ago is that there should be no need to turn paper losses into real ones.

Provided you stick to the golden rule of only investing money you can afford to commit for five years or more, you should be able to avoid selling shares when prices are temporarily depressed. For example, many people remember that Black Monday, 19 October 1987, saw the FTSE 100 index of Britain’s biggest shares fall by 10% with a similar drop the next day. Fewer folk recall that the index actually ended that calendar year slightly higher than it began.

Of course, the past is not necessarily a guide to the future. However, according to the Barclays Equity Gilt Study 2019, it remains a historical fact that if you had invested for any period of five consecutive years since 1899 there was a three-in-four probability of shares delivering a higher return than deposits. To be precise, shares reflecting the changing composition of the London stock market did better than deposits in 76% of five-year periods and beat bonds in 72% of them.

More recently and more specifically, I remember how share prices plunged when the technology, media and telecommunications (TMT) bubble exploded at the start of this century. Despite that, being a shareholder in Polar Capital Technology Investment Trust (stock market ticker: PCT) since the early Noughties has proved very profitable and it remains one of my top 10 holdings by value.

According to independent statisticians Morningstar, PCT delivered total returns of 405% over the last decade; 157% over the last five years and, perhaps most remarkably, remains 14% up over the last very difficult year. Despite those facts, this trust trades at 1% discount to its net asset value (NAV).

Looking forward, PCT may benefit from changes in the way we live. Its manager, Ben Rogoff, told me: “5G infrastructure will be a big focus for stimulus spending in the second half of 2020, particularly if many of us are still working from home as a result of the coronavirus crisis. We expect to see long-lasting behavioral changes for both consumers and corporates alike, even after this current phase of containment passes, and that may be longer than we all hope. While our sector is not immune from the economic slowdown, with strong secular tailwinds, the right technology stocks may prove more defensive than many expect.”

Similarly, another long-term top 10 holding in my ‘forever fund’ is doing well by doing good; helping to fund research to fight the coronavirus. Worldwide Healthcare (WWH) delivered total returns of 354% over the last decade; 53% over the last five years and 3% over the last year. Its co-manager, Trevor Polischuk, said: “Many companies are accelerating their efforts in the anti-viral space in hopes of creating a treatment to help infected patients.

“Whilst the healthcare industry moves into the forefront of the war against COVID-19, our focus remains on the positive fundamentals of the industry – its near-term defensive qualities and long term growth prospects driven by innovation and societal secular demand.”

It is an oddity of investment that most people are keen to buy shares when prices are high and shun them when prices are low; the opposite of how they behave in any other aspect of their lives. However, the first step toward making a profit is often to buy low.

There are plenty of obvious reasons to be worried at present and the future remains unknowable but there are lessons to be learned from the past. Looking back over more than a quarter of a century as an individual investor, I would say the best time to buy shares is often when we least feel like it.

4 May 2022
Faith Glasgow looks for bargains among mainstream investment companies.